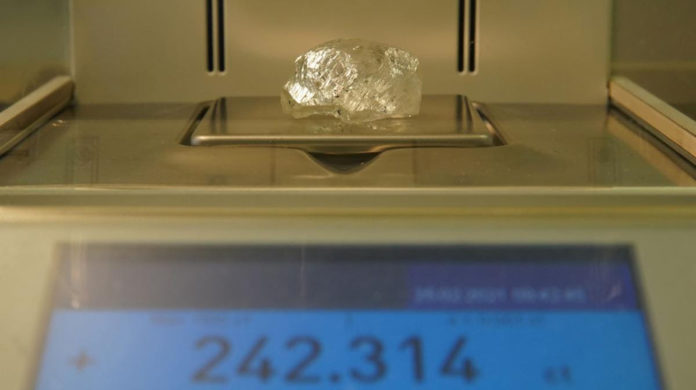 To honour the 100th auction in its history, in Spring 2021 Alrosa hosted a round of high-quality rough diamond sales in various locations.

In addition to the Jubilee Auction #100 where three notable diamonds weighing 242.31 carats, 190.74 carats and 136.21 carats were tendered, the Group hosted two more auctions of special-size diamonds. The one was digital with an additional option of on-site viewings in Dubai, where 100th auction’s lots were demonstrated. The other, having a traditional format, took place in a global diamond trading hub of Antwerp.

“We are glad to see such a keen buyers’ interest in the exceptional mix of rough diamonds that we decided to tender to honour such an important milestone as the 100th special-size diamond auction in Alrosa history,” said Evgeny Agureev, Deputy CEO, Alrosa.

Along with the Jubilee auction itself with a trio of exceptionally large lots, Alrosa hosted a classical auction of special-size diamonds in Antwerp as well as a digital auction with viewings in Dubai as an option. Through this, a large number of clients were able to get access to the goods despite travelling restrictions.

“Growing interest of buyers from all over the world indicates that the diamond industry has successfully passed through unprecedented challenges and proved its resilience,” Agureev added.

Proceeds from three auctions conducted on March 22 were recorded at $23.9 million. This includes proceeds from the Jubilee Auction #100 of $7.7 million. Due to the active bidding, all three lots were tendered at a multi-round procedure with a maximum number of rounds reaching 26. After a tightly contested race that lasted almost seven hours, three companies from India and UAE placed the winning bids.

Apart from that, digital auction revenue amounted to $5.5 million with 30 lots weighing 625 carats went to 14 companies from Belgium, India, Israel and UAE.